Being told GM food needs more testing by people who jump at the chance to eat the latest rare “miracle” fruit no one has ever heard of.

Being told “do your research” by people who dismiss and deny the findings of the world’s leading researchers.

Being called closed-minded by people who proudly declare they will never change their own views no matter what.

When psychics who claim an intuitive ability to communicate with the spirit world struggle to distinguish between “an M or J sounding name,” and need your help.

When people try to prove they aren’t conspiracy mongers by saying that the term “conspiracy theory” was invented by the government to discredit them and hide the truth.

When someone lectures you on the dangers of putting toxins in your body from behind a cloud of marijuana smoke.

Being told GMOs need more testing by people who admit they will never accept GMO crops no matter how many tests are done.

Being lectured on the merits of detoxifying my body by people who think their rectum is a good place to put coffee.

When conspiracy groups who wield enough power to kill anyone and cover up everything can’t manage to take down a youtube video.

When anti-GMO activists who demand the “right to know” turn out to be among the least informed.

Being told we “can’t know the mind of God” by people who say he wants me to cut off the tip of my penis.

When aliens evade radar and erase memories to avoid detection and then make huge conspicuous circles in our crops and dump mutilated cattle on the side of the road.

Being told we don’t need to pay attention to science by people who make every effort to impersonate it, speak its language, and steal its legitimacy. 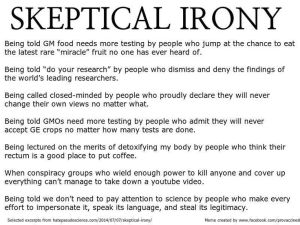